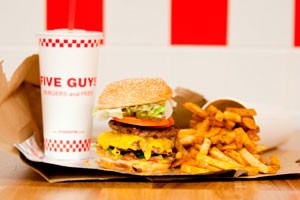 I’ve found out I have something in common with President Obama — and it has nothing to do with politics.

We’ve both been to Five Guys Burgers and Fries, although not the same one. He went to a D.C.-area Five Guys last year. (The trip made the news, a diligent journalist even reporting on what he ordered on his cheeseburger — lettuce, tomato, jalapeno peppers and mustard, if you care.)

I went to the newly opened Five Guys in Northcrest Shopping Center with a couple of people from work last week.

I didn’t think I’d ever get excited about a burger joint, but Five Guys got a big buildup from a co-worker raving about its burgers and fries. The chain started in 1986 in Arlington, Va., expanded to the D.C. metro area and now has more than 550 locations in more than 35 states. The menu is pretty limited. You can choose from burgers, hot dogs, a couple of non-meat sandwiches and fries. That’s it. No salads, no wraps, no soup. If you want vegetables, order lettuce and tomatoes on your sandwich.

Five Guys is located in the small strip center at Northcrest where Wild Birds Unlimited is. Apparently Fort Wayne has discovered it — it was busy at lunchtime last week. The interior is done in a cheery red-and-white tile motif, with an open kitchen where I counted seven people working. They were flipping burgers, frying fries and assembling custom sandwiches. It’s a loud, bustling place. 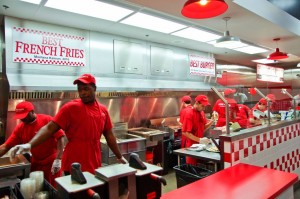 I’m glad I had a Five Guys veteran along to warn me about the size and quantity of food you get. Be forewarned: The “little” burgers are what I would consider a normal-sized burger, made with one patty. The burgers that aren’t called “little” are made with two patties.

And the fries — oh my goodness. My co-worker said we could split a regular order. I was skeptical, but glad I followed his advice. Even splitting a regular order we had leftovers.

A Five Guys employee saw us puzzling over the menu board and advised us of the size and quantity of food. I hope they do that for all newbies. I think that “little hamburger” nomenclature is unintentionally deceiving.

But I don’t want to leave the impression I didn’t enjoy Five Guys. I did. Immensely. All three of us did.

We placed our orders, filled our drinks and then they grabbed a table while I waited for the bags of food to come up.

Five Guys cooks all their burgers well-done, so you don’t have a choice about that. But you can customize your burger or hot dog with a choice of 15 free toppings ranging from the usual — catsup, mustard, relish — to jalapeños, hot sauce or grilled mushrooms. I ordered my cheeseburger with catsup, lettuce, pickles and onions. It was served on a toasted sesame seed bun. It was fresh, juicy and piping hot. As one of my co-workers observed, these burgers don’t sit around under a warming light. 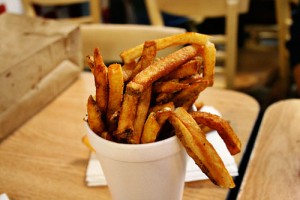 If Five Guys’ burgers are way above average, their fries are spectacular. Bags of spuds are piled up around the restaurant. A sign at the counter says where today’s potatoes come from. Eureka! Fresh, not frozen fries. They’re cut with the skin on and fried in 100 percent peanut oil. Crisp and golden brown on the outside, soft on the inside and irregularly shaped, each bite is different. One may be thick and hot on the inside, the next is thin and crispy, almost like a potato chip.

Best of all, they offer malt vinegar, which is what I like to put on fresh French fries. They can be ordered Cajun style, but we all were happy with regular fries.

If you’ve got a hankering for a good old-fashioned burger and fries, I’d encourage you to indulge your craving at Five Guys.