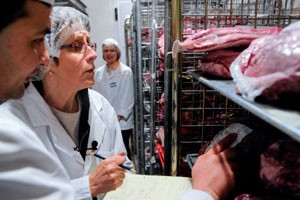 Taco Bell doesn't just head south of the border – it crosses all the way over into dangerous high-fat, high-sodium territory with some of the items on its current menu. You would think that for a four-item meal, the ingredient list would be pretty simple, but that doesn’t seem to be true for this crunchy beef taco.

If you truly want to “Live Mas”-- “mas” means more in Spanish -- as Taco Bell’s new slogan exclaims, you've got to learn more about what's going into those teeny tacos that are part of the 2 billion served each year.

The “real” in “real cheddar cheese” might as well stand for “really processed.”

Taco Shell: This shell may contain the least amount of chemicals after the lettuce, but one thing makes it stand out in an alarming way: You'll strike it rich with oil. Yes, the crunchy goodness is likely achieved by deep-frying, which makes this shell high in fat. Besides ground corn, this food may also contain vegetable oil, soybean oil, corn oil and cottonseed oil, plus lime, water, citric acid, oats and fiber. 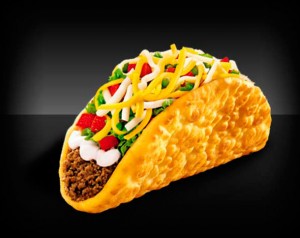 Beef: Ground beef should technically be just one ingredient, but this brown mixture is made up of more than 25 ingredients. The seasoned beef contains beef, water, salt, sodium phosphate, beef broth, potassium phosphate and potassium lactate. And then there’s the actual seasoning which is made up of a laundry list of ingredients including: cellulose, chili pepper, onion powder, salt, oats, maltodextrin, soy lecithin, tomato powder, sugar, soybean oil, sea salt, yeast extract, spices, garlic powder, citric acid, caramel color, disodium inosinate, disodium guanylate, potassium chloride, cocoa powder processed with alkali, natural and artificial flavors, trehalose, modified corn starch, inactivated yeast, lactic acid, torula yeast and natural smoke flavor. Among the most suspicious items in the group, Canfield notes, is the yeast extracts and natural smoke flavor. “The yeast may cause a similar reaction to MSG sensitivities,” she explains. “There's also been some speculation that the natural smoke flavor made from beech wood may be toxic in humans, but much more research and evidence is needed before we can rule it a problem.”

Caramel Color: This questionable ingredient found in the beef mixture deserves its very own call-out. If beef is already naturally brown, why add brown coloring to it? “Beef isn't very attractive,” Canfield explains, “and since visual appeal is very important to consumers, it's important to make it look nice.” Unfortunately, vanity comes at a price: “The caramel color may be contaminated with 4-methylimidazole, a possible carcinogen to humans,” Canfield warns.

Cheese: The “real” in “real cheddar cheese” might as well stand for “really processed.” According to FoodFacts.com, the cheese in this taco is made of milk pasteurized cultures, salt, enzymes, annatto color and anti-caking agents. “Annatto color, which derives from a plant, may cause an allergic reaction, similar to pollen, in some people,” Canfield warns. “Since it's not a listed ingredient for Taco Bell, people with this allergy can't avoid triggering a reaction, such as hives.”

Sodium: This taco contains something of a salt assault. Everything but the lettuce is loaded with salt. While some sodium is essential for your body to function properly, exceeding the limit of 2,300 mg per day -- two of these tacos make up more than 25 percent of your daily allowance -- may increase your risk of hypertension, cardiovascular disease, stroke heart attack and other health issues.

The Verdict: Not terrible, but possibly troubling.

The Sentence: What makes Taco Bell so special is its preformed shell, which was invented by the franchise founder, Glen Bell, in 1951. You can make your own healthy hard-shell tacos that you can fill with ground chicken or turkey at home. Preheat the oven to 375 degrees Fahrenheit. Steam fresh corn tortillas -- you can make your own for a healthful option or use store-bought -- by wrapping the tortillas in a slightly damp paper towel. Microwave on "High" about 30 seconds. Place the tortillas on a large, flat platter and coat both sides with light cooking spray, or brush with melted butter or margarine. Drape the tortillas over two bars of the oven rack and bake until crispy, about seven to 10 minutes. Remove from the oven and stuff with your favorite taco ingredients or get inspired by some of these delicious recipes: