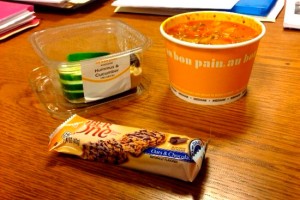 Finding healthy foods at takeout restaurants is right up Danielle Omar’s alley. That’s because the Fairfax-based dietician works with busy clients who are short on time and looking for quick, no-brainer meal options that won’t break the caloric bank.

It’s all about food confidence, she says—the ability to “go into any food situation and feel like you know what to eat.” While it’s helpful to have nutrition facts handy, they’re not always available. Omar tells clients to look for keywords such as “grilled” or “baked,” and to consider getting extras like cheese or dressings on the side. That way, you can control the portions. “When in doubt, go for the soup,” she says. “There are usually some great low-fat soups available.”

That’s exactly what she found at Au Bon Pain, the ubiquitous restaurant/bakery chain. “Any of the low-fat soups are good options. You could have a small serving as a side with half a sandwich, or get a large and have it as the main course,” she says. Au Bon Pain carries 19 low-fat soups (not all are served everyday at every location), and many come in at well under 200 calories in medium-size portions. Omar says to go for one of the fiber-packed lentil- or bean-based soups to feel full longer.

What not to order on the soup menu? The Baked Stuffed Potato soup, which has 20 grams of fat and 350 calories in a medium-size serving, and the Macaroni and Cheese, a whopper with 500 calories and 29 grams of fat in the same serving size.

Here’s a healthy surprise: the chicken-salad sandwich. “At most restaurants, chicken salad is a no-no, as it’s usually loaded with fat from the mayo,” Omar says. Here, the sandwich has just 11 grams of fat, including 2 grams of saturated fat, and 490 calories. Switch from country-white to whole-wheat multigrain bread, and you can save a few calories while adding nine grams of fiber—not too shabby.

The lightest sandwich is the grilled chicken breast on ciabatta, which comes with Dijon mustard (one of your best choices when it comes to condiments), tomatoes, and lettuce. The sandwich clocks in at just 4 grams of fat and 470 calories, and it has 40 grams of protein. 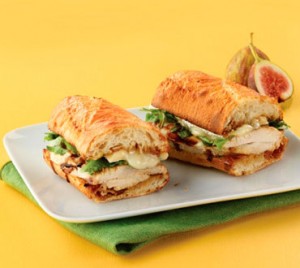 The worst-for-you sandwiches include the Santa Fe turkey, which has 25 grams of fat including 11 grams of saturated fat—“That’s just ridiculous for a turkey sandwich,” says Omar—and the turkey club, which has 700 calories and 31 grams of fat. Another surprise: the toasted Southwestern black-bean burger. It contains 32 grams of fat (11 saturated) and 670 calories. “That’s just shocking,” says Omar. “I can’t even begin to tell you where they’re hiding all those calories and fat.”

On the salad front, the healthiest option is the Thai-peanut chicken salad, with 15 grams of fat (including the dressing) and 23 grams of protein. The salad includes tomatoes, cucumbers, carrots, and fried wontons, so “it’s good for an interesting salad,” says Omar. “You’re not just getting a plate of greens.”

She says to stay away from the turkey Cobb salad, which is “the epitome of what not to get.” The ingredient list should be your clue: gorgonzola cheese, eggs, croutons, bacon. The 12-ounce salad contains 19 grams of fat and 340 calories—and that’s not counting the blue-cheese dressing, which alone has 33 grams of fat.

If you must have bread with your soup or salad—this is a bakery, after all—Omar says to grab a cheddar-jalapeño breadstick. At 130 calories, it’s the lowest-calorie choice. Most of the other breads are between 200 and 250 calories each. “Definitely don’t get a bread bowl,” she says. If you eat the whole thing, you’ll add another 620 calories to your meal.

“You only need a certain amount of calories every few hours, so what you don’t use, you store as fat,” says Omar. “Count on these desserts getting banked as fat. They’ll literally go straight to your hips.”