How to eat chip butties 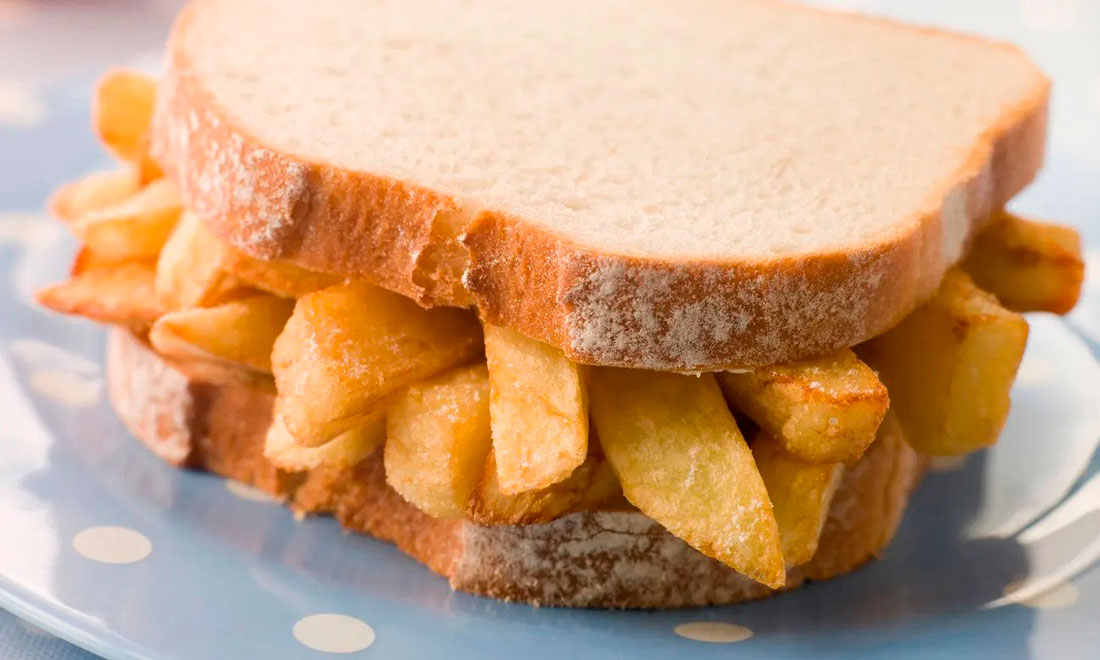 Hard liquor, the chip butty is the most reliable way we human beings have to mentally shut out this harsh world and, momentarily, transport ourselves to a happier, more innocent place. Doubt the efficacy of this panacea? Then give How to Eat an example of another food that so passionately unites such a broad culinary church as a) Sheffield United season-ticket holders, b) Michelin-star chef Tom Kitchin (ignore the headline in this Guardian article – in food there is no such thing as guilty pleasure), c) Burger King franchisees in New Zealand and c) hip, young SNP MP Mhairi Black? See? You can’t. No one of sound mind (not even carp!), can deny the transcendent carb-on-carb pleasures of the chip butty.

But only if that butty is made correctly. Which is where How to Eat, the series exploring how best to enjoy favourite foods, can help.

It is an absolute no from HTE to all baps, buns, brioches, barmcakes, cobs, teacakes, morning rolls, oven-bottoms, soda farls and other regional bread roll variations. First, unless you painstakingly mash your chips down into said roll, they are likely to tumble out like scrap metal scattering on to the hard shoulder from under a poorly secured tarpaulin. Second, a roll is too much bread. Particularly if, as is frequently the case, you are eating an already slightly stale barmcake that is both friable and stodgy – liable to shred into pieces at the application of all but the very softest butter and indigestibly dry.

Unimaginative and/or outraged traditionalists will harrumph that the chip butty originated in 1860s Oldham as a chip barm, but we are not tied to that format, in the same way we no longer employ kids as chimney sweeps and women have the vote. Societies mature, civilisations advance; the chip butty has found its ideal home in sliced bread.

That bread must be white, of course. Anything on the wholemeal-seeded-rye spectrum will introduce a dominant note of, well, flavour – an earthy hint of actual substance – that is thoroughly unwelcome here. In a chip butty, the bread should be a soft, bland, delivery vehicle, which is why sliced-white Chorleywood from the heart of the industrial-food complex is the right choice. No sourdough. Nothing remotely rustic. No hint of human intervention, preferably.

Yet it is important to note here that, despite what Real Bread Campaign militants will tell you, not all supermarket loaves are created equal. Many mainstream loaves are feeble, balsa-light creations with all the durability of a Liberal Democrat manifesto pledge. Instead, choose a loaf that is daisy-fresh, pliable, soft and strong, preferably one with that putty-ish texture so derided by artisan bakers. Such plasticine-like bread makes the perfect casing for a chip butty. If thickly buttered (budgets will vary, but butter exponentially elevates a chip butty), such bread will almost mould itself around your chips, locking them in place.

One slice or two?

Food stylists love the two-slice chip sandwich, chips protruding at bizarre angles like gun turrets on a particularly fearsome warship. This is a media nonsense, one that, in its oversized, flapping lack of structural integrity, poses the same issues of spillage as the bap or roll. Instead, both as a matter of speed and chip-security, a chip butty should be made with one uncut slice of bread half-stuffed with chips and folded in two, briefly and lightly squashed with your palm, and eaten. Heap. Fold. Squash. Repeat.

That need to have a stack of pre-buttered bread waiting to go is one of the key reasons the chip butty is best enjoyed at home. Either you control these crucial details or you leave your fate in the unreliable hands of a chip shop owner who may be a fellow true believer, but who, equally, may be an uninterested business owner for whom a three-day-old barmcake thinly scraped with the cheapest catering margarine constitutes bread and butter. Do you want to take that risk?

Between french fries (too airily insubstantial) and potato wedges (way too dense), there are myriad variations on the chipped potato, from scallops to curly cajun fries, that are also not suitable for a chip butty. For instance, skin-on chips, which offer such welcome son-of-the-soil complexity in other contexts, would confuse matters here, just as, in their shatteringly glassy texture, Heston Blumenthal’s laboriously brilliant triple-cooked chips would introduce a jarring crispiness to the chip butty. 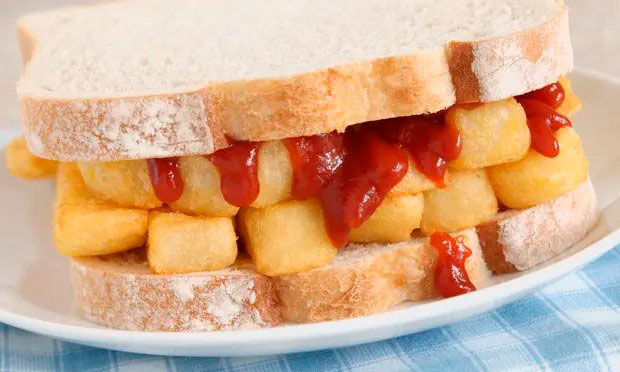 The perfect chips for a chip butty are lightly fried, slightly pale chips that, having steamed a little too long in their paper wrapping on the journey home, are an enchanting mix of softly yielding potato and chewy caramelised edges that, liberally salted and doused in vinegar, seem to be almost limply giving up on life as you pile them on to a slice of bread.

Think of a chip butty as expensive parquet flooring. It is made up of different pieces. There are joints. There are design details that, on close inspection, reveal it to be an extraordinary piece of work. But all that is of minor interest compared with how this smoothly interlocking spectacle works as a dazzling whole. Likewise, the settled elements of the chip butty – melting butter, hot oil, warm soft potato, gummy bread, salt, vinegar – should elide so smoothly that this interaction of fats and carbs, sodium and acidity, should be almost imperceptible to the conscious mind. The ingredients should form a totality far greater than the sum of its parts.

To bring sauces into this finely tuned interplay is to introduce a rogue element that, for all it seems an exciting new dimension to your sandwich, ruins it. HTE realises that such honesty is difficult for people to handle (“This writer needs shooting,” was one response when HTE ruled out HP on chips in 2014). But for all that these sauces may enliven chips elsewhere, adding tomato ketchup is an act of clumsy brutality in a chip butty; gravy is a danger with bread in play; and chip shop curry sauce is a curve ball. Mayo, meanwhile, is appalling in hot sandwiches – a rich, gluey layer of aggro flavours.

The chip butty works. A fish sandwich can work. Yet the fish and chip sandwich is a dimwitted gilding of the lily, too much of two individually good things. It is too thick to eat comfortably, battered fish is slippery and difficult to control in a sandwich, and the bread muffles one of the key textural and acoustic pleasures of fish and chips, the satisfying crunch of crisp batter.

At the other end of the culinary spectrum, the mayo-bound crab, samphire and chip bun so drooled over by Jay Rayner at Hackney’s Duke of Richmond may be delicious, in its own way, but it has deviated so wildly from the original concept that, surely, it barely supports its listing on the menu as a “Cornish crab chip butty” (£9.50)? Would you put crisps in a tuna sandwich and call that a chip butty, too? There is a relationship there, arguably. All these creations share a family tree. But if this is a family with a shared core DNA, its members are now scattered across the globe, communicating only through Christmas cards, living lives so divergent in their experiences that any meaningful connection or shared outlook on life has been lost.

Sitting between those two extremes are lots of additions (cheddar, parmesan, fried egg, bacon etc) that, while not actively unpleasant – how could they be, given that these are obviously complementary ingredients – fail to transform the chip butty into a heightened experience. They are, at best, curios, fleetingly interesting deviations, but ultimately distractions from the majesty of the chip butty classique.

Whenever you have fish and chips, as a first anticipatory course or last celebratory finale or both. Let the chip butty bookend your experience.

Note: those bitter Camellia sinensis leaves should be left to brew at such length that the caffeine will hit you like the sparkling rush of a less legal stimulant. Dilute the tea with just enough milk that it turns brick red and delivers its astringent tannins on to your tongue like a seaborne landing of crack commandos.

So, chip butties: how do you eat yours?