Fast Food Companies Would Rather Hire Robots Than Give Raises 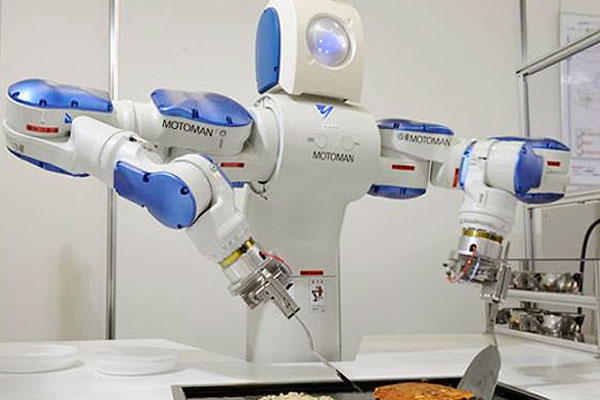 The fast food industry has a solution to the rising demand to raise worker salaries. They'll simply develop advanced technology to replace them. That's right—robot fast food workers are coming. AI or GTFO.
Robots. Time after time we have tried to warn our readers of the very real dangers of the coming robot apocalypse. But while the rest of the world is content to shun the reasonable voices such as my own, Linda Hamilton in Terminator II-style, the robots stealthily, diabolically plot their next move. This time, it appears they are planning to take over America's most sacred profession—the fast food industry.
According to CNN Money, we barely have any time to collect our thoughts before this crisis swallows up our entire society:
Restaurant industry backers warn that a sharp rise in wages would be counterproductive, increasing the appeal of automation and putting more workers at risk of job loss.
Panera Bread (PNRA) is the latest chain to introduce automated service, announcing last month that it plans to bring self-service ordering kiosks as well as a mobile ordering option to all its locations within the next three years. The news follows moves from Chili's and Applebee's to place tablets on their tables, allowing diners to order and pay without interacting with human wait staff at all.
University of Oxford researchers estimated that there is a 92% chance that fast-food preparation and serving will be automated in the coming decades.
Delivery drivers could be replaced en masse by self-driving cars, which are likely to hit the market within a decade or two, or even drones. In food preparation, there are start-ups offering robots for bartending and gourmet hamburger preparation. A food processing company in Spain now uses robots to inspect heads of lettuce on a conveyor belt, throwing out those that don't meet company standards, the Oxford researchers report.
Many are now asking "what can we do in the wake of this most Earth-shattering news?"
The answer is very clear. We must make ready the bunkers. It's all about the bunkers now, people! You must sort through your possessions and decide which of your loved ones you want to leave out of the bunker in favor of a beloved pet or cherished Barcalounger.We've all had our time to laugh and joke and talk about how hot robot sex could be. All of that comes to end now.
Witness the terrifying reality one expert paints about our dark, horrifying future under the rule of the oppressive robot regime:
Other industry observers aren't so definitive, noting that it takes time to introduce new technology and that human interaction has always been a major component of the hospitality business. What's clear at least is that software and machines will play an increased role in our dining experiences going forward.
Darren Tristano, a food industry expert with the research firm Technomic, said digital technology will "slowly, over time, create efficiency and labor savings" for restaurants. He guessed that work forces would only drop as a result by 5% or 10% at a maximum in the decades to come, however, given the expectations that customers have for the dining experience.
"If you look at the thousands of years that consumers have been served alcohol and food by people, it's hard to imagine that things will change that quickly," he said.
Wait—what? But I just sold off everything I own and traded in all my money for gold bullion that I buried in my backyard. All I have left now is this Bear Grylls bug out bag and a draft of my manuscript "She Carried a Rainbow of Hope: Surviving Robot Armageddon." (Shut up, it's a working title.)
Tags:
Companies Fast Food Robots
November 05, 2016 Admin